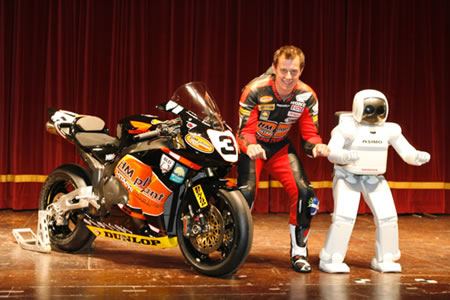 ASIMO travelled to the Isle of Man this week to celebrate the Centenary of the world famous Tourist Trophy (TT) races. The Isle of Man TT has a special place in Honda’s own history and has been the cornerstone of Honda’s racing efforts for the last 48 years. To mark the occasion ASIMO will be a special guest at the annual ‘Honda Day’ on the 3rd June, which celebrates the importance of racing to Honda. This year will include showcases of stunt riding and freestyle motocross as well as three opportunities for racing enthusiasts to meet ASIMO.

Local school children and their families have also been the focus of ASIMO’s visit to the Island. During the week ASIMO has performed 12 specially arranged shows at the Villa Marina in Douglas, the Island’s capital. Each show was hosted by motoring journalist Fran Robinson and was followed by a question and answer session.The festival lasts for two weeks with modern day motorcycle racing heroes aiming to take race victories for the 37.73 mile Mountain Course as well as further solo and sidecar racing. A special re-enactment of the 1907 TT will feature vintage vehicles and encourage attendees to wear period dress.