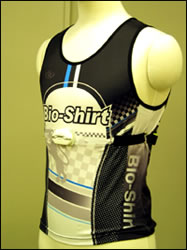 Athletes to Wear Smart Bio-Shirts which measure their heartbeats, temperature and running speeds

Amateur marathoners sometimes fail to pace themselves during the long, 42.195-kilometer course. This is very dangerous and can even lead to a runner’s death. To reduce the risk, a team of Korean scientists has developed wearable computing ware, called BioShirt, which warns runners who try to exceed their limits. The BioShirt is composed of two parts _ a specially designed shirt and a monitoring system that weighs about just 20 grams including a battery. The battery life is roughly three and a half hours but it will be prolonged to approximately five hours, the average running time of recreational marathoners.

Next year, people wearing BioShirt will be able to know their temperatures, heart rates and speeds while running on a real-time basis using a wristwatch-type miniature computer enabled by Bluetooth. BioShirt can also be used as a non-invasive ambulatory monitoring system for patients.
Via Korea News