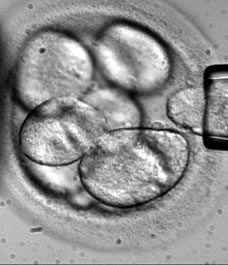 A team at Newcastle upon Tyne University inserted human skin cells into the hollowed-out egg cells of a cow – and jolted the egg into life. The resulting embryo, which will eventually be used to investigate and treat diseases, survived for three days. The scientists were only given permission to carry out the controversial experiment in January and the speed of their success has astonished scientists. The experiments have angered the Catholic Church and other religious leaders, who argue that the research is unnecessary and unethical.

The Newcastle researchers say it could revolutionize medicine and provide cures for diseases such as Alzheimer’s, Parkinson’s, cystic fibrosis and Huntington’s. The team, led by Dr Lyle Armstrong, is trying to find a fast, cheap and reliable way of creating human stem cells.