Casio announced today that it will release two new digital pianos– GP-500BP and GP-300BK. With the new GP-500BP and GP-300BK, Casio is introducing the new CELVIANO Grand Hybrid lineup, which combines the advantages of both digital and acoustic pianos while delivering an experience like that of a grand piano, including the tone, keys, and playing comfort. Casio has developed a new AiR Grand Sound Source that enables beautiful sound and rich reverberation just like a grand piano. It provides the sound profiles of three grand piano styles with a long history: the Berlin Grand, which is known for its elegant clear sound and a reverberation that gives each performance rich melodic color; the Hamburg Grand, which delivers gorgeous power and strength with plenty of string resonance; and the Vienna Grand, which provides a calm and stately sound with rich bass and beautiful tones when the keys are played softly. 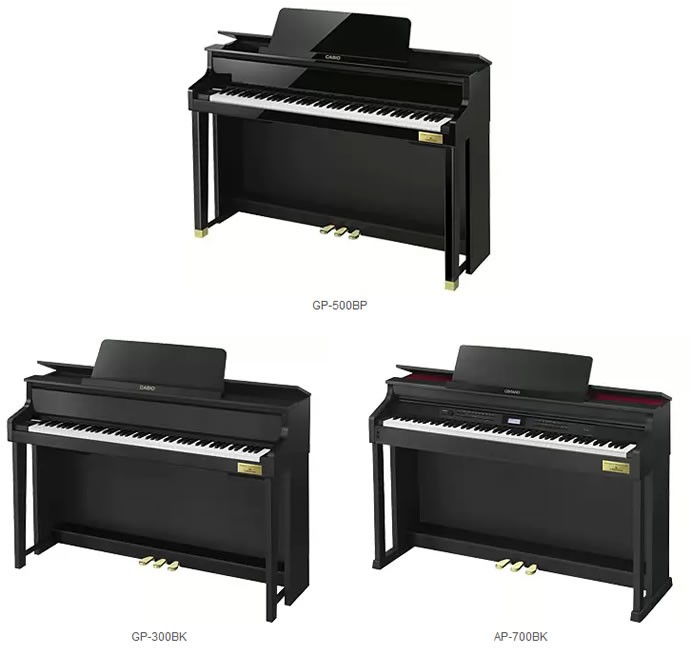 Of the three, the Berlin Grand sound was developed in collaboration with C. Bechstein, a piano maker with a history of over 160 years. As a result, the new models have moved beyond the realm of conventional digital pianos, demonstrating a commitment to nuanced sound creation. The GP-500BP and GP-300BK feature a Grand Acoustic System that faithfully represents the sound of a grand piano as it emanates from above and below the soundboard. The system delivers three-dimensional sound with tonal elongation, expansion and depth.

The Natural Grand Hammer Action Keyboard combines spruce wooden key material as used in C. Bechstein grand pianos, and a new unique action mechanism that delivers the right hammer movement, which has a big impact on the playing response of a grand piano. In addition, Casio is announcing the release of the CELVIANO AP-700BK, which also features the newly developed AiR Grand Sound Source. The two new models will bring together all the electronic musical instrument technology that Casio has developed over 35 years. These instruments are designed to faithfully represent the tone, keyboard and playing comfort of a grand piano.