The EQS-A500RB delivers smooth operability for a variety of features including a stopwatch that can measure up to 10 lap times at an accuracy of 1/20th a second, fastest lap time display and world time. For example, lap time results can be displayed using the electronic crown switch’s intuitive pull-and-turn motion. As a special feature, the new watch displays the team logo at the 9 o’clock position. 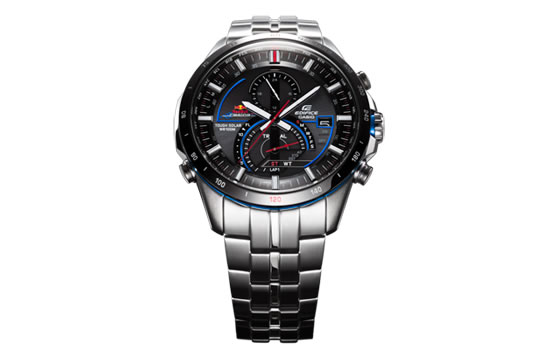 In addition, the metal parts such as the inset dial and bezels are highlighted with the blue team color to express strength and sharpness. Furthermore, the second hand and the small hand at the 6 o’clock position feature the red team color as an accent to evoke an active atmosphere. As a one-of-a-kind collector’s item, the EQS-A500RB comes in a special box with stands for displaying the watch and photographs of the Red Bull Racing team’s drivers and RB8 Formula One car.