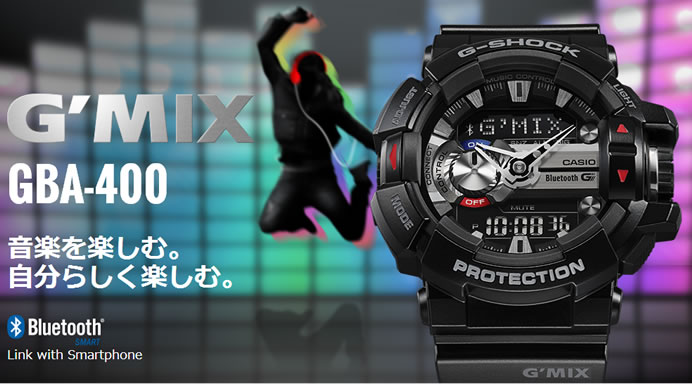 Casio announced the release of the latest addition to the G-SHOCK line of shock-resistant watches. The G-SHOCK GBA-400 watch offers a variety of ways to enjoy music by pairing with a smartphone. The new G-SHOCK GBA-400 watch supports Bluetooth Smart connectivity and offers greatly enhanced features for enjoying music when paired with G’MIX App, a new music app for smartphones that can control audio settings, add live effects that simulate concert sound, and identify the names of songs from music playing nearby and then display the song title on the digital display of the G-SHOCK watch.

Song identification can be triggered remotely by turning the rotary switch on the watch, without having to touch the smartphone. By operating the watch buttons, the user can trigger preset or customized tones on a paired smartphone—just one of the ways the watch enables users to play with sound and enjoy listening to and identifying music.