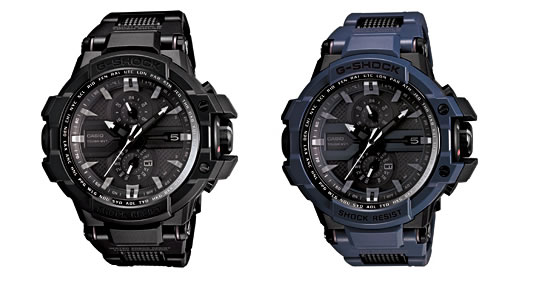 Casio announced today a new addition to the G-SHOCK line of Gravity Defier aviator concept watches-the GW-A1000FC. Designed for the harsh conditions aviators face, the new GW-A1000FC boasts Triple G Resist construction that withstands shocks, centrifugal force, and vibrations The new Casio GW-A1000FC watch comes with a new watch band designed by Casio, which is built from urethane pieces internally reinforced with metal, linked by coupling segments made of a new type of resin called fine resin which is a light and durable material. An unparalleled weight reduction has been achieved compared to a metal band, with no compromise in durability. The simple clasp-style design of the band also makes the watch easier to take off and put on.

Casio GW-A1000FC comes with Smart Access, which employs an electronic crown switch and a multi-motor drive that independently powers the hour, minute, and second hands to make it easier than ever for the wearer to access and use the watch’s many functions. The functions pilots rely on, such as World Time and the stopwatch, are completely intuitive to operate. To ensure reliable operation even while flying an aircraft, the crown switch also has a quick-lock mechanism that enables simple lock and release. The new model comes in two color options. The all-black GW-A1000FC-1 conveys a rugged impression befitting a G-SHOCK, while the navy-blue GW-A1000FC-2 has a nuanced casual feel.