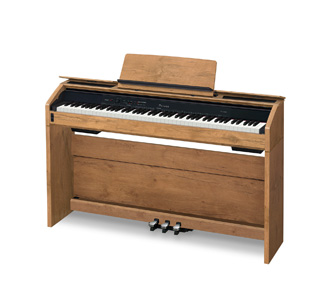 Casio will release two new models in its Privia series of digital pianos to commemorate the 10th anniversary, on October 24, 2013, of the launch of its first Privia model. The new models—the Privia PX-A100 and PX-A800— features 10 presets of different kinds of grand piano tones and simulate the acoustics of 10 types of concert venues. Both models feature all-new finishes that push the boundaries on the conventional look of a piano. The compact PX-A100 model is finished in a smart, refined metallic color. Consumers can choose from two colors: metallic red or metallic blue. The cabinet-design PX-A800 model is finished in a natural oak tone and is also fitted with an openable top board. 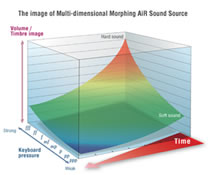 Compact, lightweight and stylish, Privia pianos are designed to deliver the expressiveness and performance capabilities of acoustic pianos. The Privia series has become popular among a wide range of people since its launch in 2003, helping to expand the overall market for digital pianos. Since 2012, Casio has equipped new models in the series with its AiR Sound Source, a highly acclaimed technology that reproduces the rich resonance of grand pianos. With 10 preset grand piano tones to choose from, players can enjoy performing in a wide range of genres such as classical, rock, jazz, pop, and dance music. Moreover, the Hall Simulator function utilizes digital technologies to simulate the acoustics of 10 different kinds of concert venues, including famous concert halls around the world as well as a cathedral and an outdoor stadium. Before you get yourself one of these awesome digital pianos, you may want to look up a piano tutorial at Takelessons.com or even get local lessons