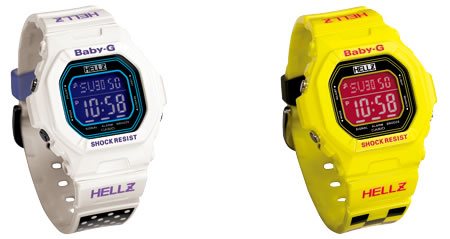 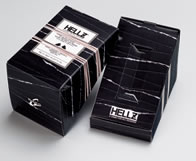 Casio announced today the release of two new Baby-G shock-resistant watches for women, the BG-5600HZ-7 and BG-5600HZ-9, both created in collaboration with the New York street contemporary fashion brand Hellz. Headquartered in Downtown, Los Angeles, Hellz is a contemporary clothing brand catering to the burgeoning class of rebellious youth. The Casio BG-5600HZ-7 and BG-5600HZ-9 add sass to the fashionable Baby-G design with its homage to 80’s pop culture. The BG-5600HZ-7 polka dot watch stems from Lanie’s love of the 80’s. The polka dot was a universal pattern that everyone used to wear growing up in that decade. The BG-5600HZ-9 taxi cab watch pays respect to the great streets of New York City, the birthplace of Hellz 1. For Hellz, yellow cabs have been the lifeline of the company since its early stages and have been there through thick and thin.

The two designs are fun and playful, adding a cool and funky element to one’s look. Featuring capabilities for the fashionista on the go, the Casio BG-5600HZ-7 and BG-5600HZ-9 models are shock resistant and water resistant up to 100 meters. The new watches also feature an EL backlight with afterglow, world time, five daily alarms and countdown timer.