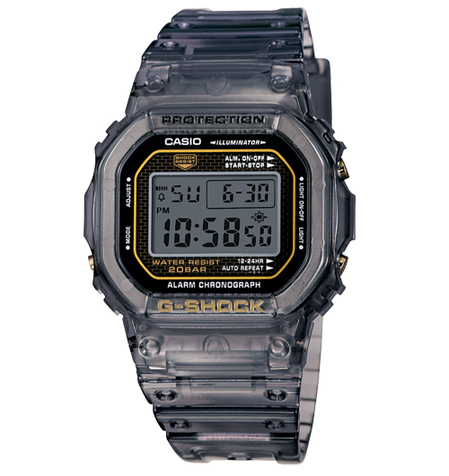 Casio G-Shock brand is 25 years strong with the release of the limited edition gray skeleton — DW5025D-8. In 1983, a Casio engineer designed a watch that would withstand a fall from atop a three-story building, creating the world’s toughest watch. Using a triple-protection design for the parts, module, and case, the G-Shock offered a radical new type of watch that was virtually shock proof. Its unique look and practicality was immediately recognized, making the G-Shock wildly popular.The design and technology of gray skeleton- DW5025D-8. is adapted from the original G-Shock which has set standards with its ruggedness and shock resistance, but features a see through light gray band and bezel. A 25th anniversary logo is engraved on the case back marking its uniqueness.

The DW5025D-8 is the second watch being released from the 25th Anniversary G-Shock watch series. The watch is water resistant up to 200M and features a multi-function alarm, EL backlight, 1/100-second stopwatch and a countdown timer. The limited edition 25th Anniversary DW5025D-8 G-Shock Skeleton is available for $130.