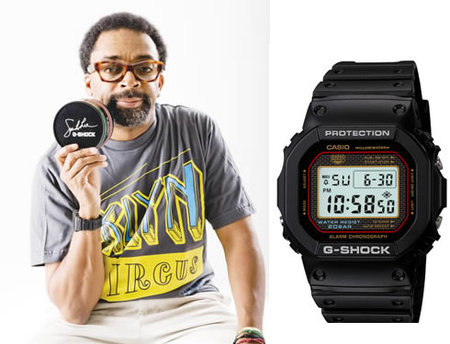 Casio DW-5000SL Spike Lee signature G-SHOCK watch is named after the movie director who has come to symbolize U.S. street culture. The Casio DW-5000SL, the Spike Lee signature model, is designed in collaboration with Spike Lee. Expressing the “shocking” concept of a “watch that can’t be broken,” the design is based on the original DW-5000 model. Turning on the EL backlight emits a green light that outlines the logo mark for Spike Lee’s film production company. Spike Lee’s signature is engraved on the back of the case. It also comes with an exclusive packing box suitable for a special model.

Casio’s first G-SHOCK went on sale in 1983. The year 2008 marks the 25th anniversary of its debut, and Casio is celebrating by releasing commemorative models and holding festive events all around the world. As part of the celebration, in February of this year Casio signed a collaboration contract with Spike Lee, who is an avid fan of G-SHOCK watches. Since then, Casio has undertaken several innovative promotions, including producing an in-store promotional video, directed by Spike Lee himself, commemorating the 25th anniversary of the G-SHOCK.