Designed to resemble the gauge of a sports car, the new Casio EFR-501 chronograph features multiple hands, including hands specifically for the alarm and several hands for the stopwatch functions, thereby enhancing the readability of the watch. In addition to a 1/20-second stopwatch, the new EFR-501 also has a dedicated hand in the center of the dial for setting alarm times. The alarm is switched on and off using a small indicator at the 7 o’clock position, while the alarm time is shown by a black hand with a red tip, for enhanced readability. The large hour and minute hands exude presence, and the date indicator at the 3 o’clock position also displays dates for the previous and next days for greater clarity. The masculine look of the dial, which employs carbon fiber like often used in motor sports, is accentuated by the metal parts of the indicators and the array of hands, which combine to evoke the feel of automotive gauges. 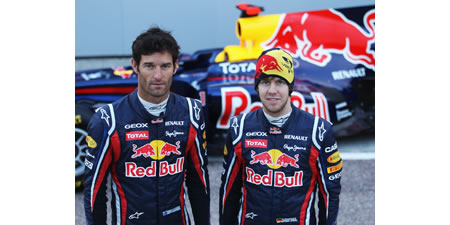 The large and sturdy stainless-steel case features a screw-lock crown engraved with the EDIFICE logo. Casio has renewed its contract with the Red Bull Racing Formula One team, last year’s F1 world champion, to continue serving as a Red Bull Racing Team Partner for the 2011 season. EDIFICE has been designated as the official team watch for the third consecutive year, and the Casio logo will appear on racing suits worn by current world champion Sebastian Vettel and Mark Webber, as well as on the mechanics’ uniforms.