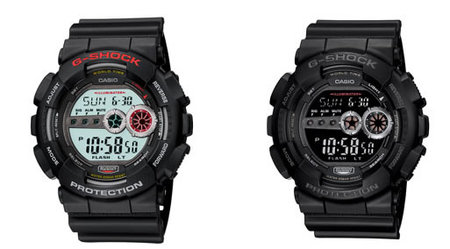 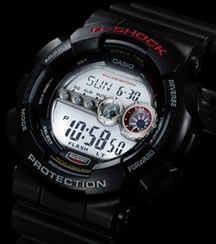 The new G-SHOCK shock-resistant GD-100 lineup of watches features a high brightness LED as the backlight for the digital display. The new GD-100 lineup uses a high brightness white LED as a backlight for the digital display. Casio’s newly developed luminescence circuit drives a high brightness white LED without using any more power than previous backlights. It provides approximately 6 times the brightness of a conventional LED, and achieves outstanding visibility, even in a bright location. Moreover, the watches are highly practical, with a long battery life of approximately seven years. The face design features five round LCD windows of different sizes all arranged in a row, which give the face a three-dimensional appearance when the high brightness LED lights up.

The Casio GD-100 lineup boasts a comprehensive range of functions including a world time function showing the time in 48 cities around the world, five alarms, a stopwatch, and a countdown timer. There is also a flash alert function that blinks the backlight with the sound of the alarm or the time-up sound of the timer, and an auto-light function which automatically illuminates the display when the user tilts the watch toward the eyes to check the time. The GD-100 lineup includes a model with a sharp looking white LCD readout on a dark background, or inverted LCD.