Casio announced today the release of three new G-SHOCK Gravity Defier watches, the G-1250BD, G-1250D, and G-1250B. Based on an aviator concept, the new shock-resistant watches offer performance that can withstand strong centrifugal gravitational force. Casio’s previously released G-1200 series of G-SHOCK analog watches have gained popularity since shipments began in May of this year. The G-1200 watches greatly exceed the highest gravitational force standard for steady-state acceleration of 15g stipulated by the ISO 2669 Environmental Tests for Aircraft Equipment.The new G-1250 series possess the same sought-after performance withstanding strong centrifugal gravitational force, while also featuring four analog indicators for checking the time and other information in an instant, along with a digital display for precisely showing the time. This combinational display improves the functionality of these watches to meet the requirements of pilots. 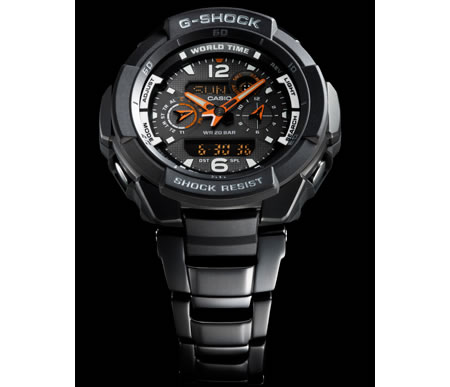 With both analog indicators and digital displays, the watches can also display times in 48 cities around the world based on Coordinated Universal Time (UTC), which is used in air traffic control. This enables pilots to check three different times simultaneously by setting the center hour and minute hands to the departure location, the small dial at the 3-o’clock position to the arrival location, and a digital display to UTC .The CasioG-1250 series is powered by Casio’s Tough Solar system, which generates power from both sunlight and indoor lighting to ensure that users always have access to the correct time.