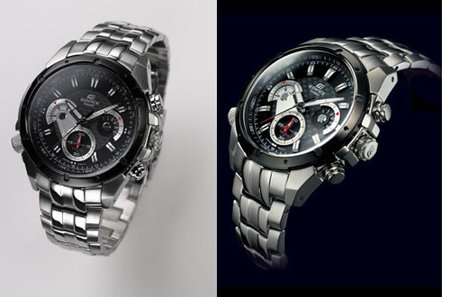 Casio EF-535SP is an innovative chronograph watch with two moving disk-shaped indicators, the latest new addition to the Edifice line of metal analog watches. The watchface of the new Casio EF-535SP utilizes the same carbon fiber material found in many racecars. On a sporty black face boldly accented with metal components reflecting the image of racing tires and other accents, there are moving disk-shaped indicators set in small gauges at the three and nine o’clock positions, and the inner ring of the watchface can also be rotated.

A large screw-lock crown and a three-dimensional crown guard are placed in the three o’clock position. The eight o’clock position features a crown for the rotatable inner ring. Combined with the solid, dignified band and the black ion-plated bezel, the overall look exudes performance and strength. Starting this season, Casio has signed a contract with the Red Bull Formula 1 Team, which will be a new brand ambassador for the Edifice line. Various sales promotion activities will be carried out with Red Bull Racing as an Official Partner.