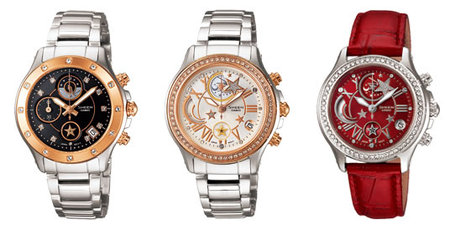 Casio announced today the release of the latest new additions to its SHEEN brand of metal watches for women who want an elegant, brilliant, and smart timepiece. The unique design of the new Casio SHN-5511 watch features star-shaped ornaments and rhinestones with a high-class glitter to capture the sophisticated luminance of the smart and elegant woman that this watch is made to please. Against a black watchface designed to represent the evening sky, a star-shaped ornament at the 6 o’clock position rotates one notch each second, glittering under the light as it moves. At the 12 o’clock position, a 24-hour dial indicates day and evening with a sun and moon motif, adding a romantic ambiance to the watch.

The watchface also boasts a two-layer design, giving it a clever three-dimensional look and distinctive character.The bezel and watch face are inlayed with glittering rhinestones, and the bezel, buttons and dials are finished in rose gold, adding to the sense of refinement and beauty. Along with the SHN-5511, Casio is also releasing the SHN-5510, which features a decorative face design inlayed with rhinestones in star-shaped patterns, and a tiny star situated inside a small window shaped like the trail of a falling star. Available in three distinctive models, the new Casio SHEEN watches feature a distinct watchface design that expresses the radiance of an intelligent, beautiful woman.