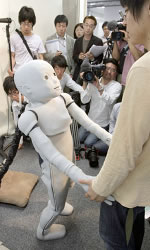 A child-sized android with flexible joints and soft skin developed by the Japan Science and Technology Agency was unveiled Friday at Osaka University, where the agency’s research and development team is based. The 1.3-meter-tall, 33 kilogram humanoid robot CB2 (Child-Robot with Biomimetic Body) has optical, auditory and tactile sensors. Fifty-one actuators inside its body run on compressed air and enable the robot to make complex movements smoothly. About 200 tactile sensors are embedded in the robot’s gray skin, which is made of silicon and other materials. The robots CB2can react to its surroundings by blinking and altering its facial expressions. The CB2 has the physical ability of a 1- or 2-year-old toddler, can turn over and stand up with assistance.

At the news conference Friday, the humanoid moved its hands and feet and turned its eyes. The robot named CB2, an abbreviation of Child-Robot with Biomimetic Body.