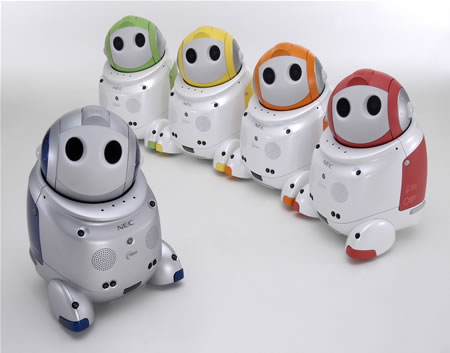 Chat with Robot PaPeRo to create your daily blog

NEC Corporation announced development of a new system for automatically creating multi-media blogs. The new system has been developed on NEC’s prototype robot PaPeRo, and is initialized when a user begins a conversation with PaPeRo about the events of their day, which the system then records and analyzes. Following this, PaPeRo searches for suitable multi-media contents on the internet, including images, illustrations and music, which are automatically uploaded and edited along with the video recording on the user’s blog. This new system facilitates ease of multi-media-rich blog creation.The novel system has been realized by integrating (1) large-vocabulary, continuous speech recognition technology, which converts the speech content of the video message into text and extracts important keywords, and (2) natural language, text retrieval technology, which enables searching of contents on the internet.

NEC’s new system facilitates simple and easy creation of multi-media rich blogs by carrying out the background work for the user.The technology developed for this system can also be applied to a variety of other information terminals.