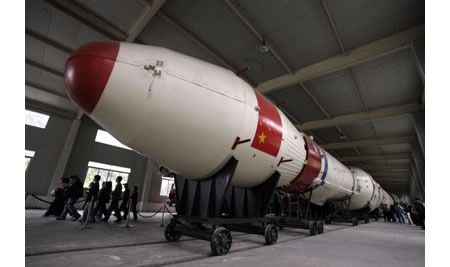 China likely to launch its first moon orbiter on October 24

China plans to launch its first moon orbiter at around 6 p.m. on October 24 from the Xichang Satellite Launch Center in Sichuan Province. The circumlunar satellite, which has been named Chang’e I after the legendary Chinese goddess who, according to legend, flew to the moon. Chang’e, Ch’ang-O or Chang-Ngo, also known as Heng-E or Heng-O, is the Chinese Goddess of the Moon. Unlike many other lunar deities, Chang’e does not personify the moon but lives on it. She and her husband Hou Yi, the Excellent Archer, are the subjects of one of the most popular Chinese mythological legends.

The carrier Long March 3A have passed all pre-launch tests and have been transported to the launch site. The lunar probe is expected to enter earth-moon transfer orbit on October 31 and arrive in the moon’s orbit on November 5. The satellite will relay the first picture of the moon in late November and will then continue scientific explorations of the moon for a year.

The orbiter will carry out a series of projects including acquiring 3-D images and analyzing the distribution of elements on the moon’s surface, according to the spokesman. The satellite launch will mark the first step of China’s three-stage moon mission, which will lead to a moon landing and launch of a moon rover around 2012. In the third phase, another rover will land on the moon and return to earth with lunar soil and stone samples for scientific research around 2017.