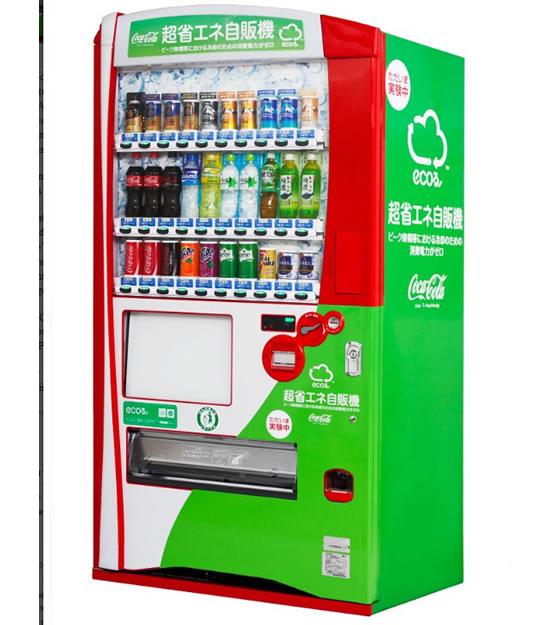 Coca-Cola Japan together with Fuji Electric Retail Systems has succeeded in developing the A011 peak-shift vending machine. This vending machine, developed as part of the Apollo ultra-energy-saving vending machine development project, can operate without using power for cooling for up to 16 hours per day. The successfully developed A011 peak-shift vending machine shifts use of power for cooling from the usual peak midday times to the nighttime, when there is a relative surplus power capacity. In addition, by using more vacuum insulation materials, insulation has improved and the machine is not affected as much by outside temperature.

In preparation for full-fledged market launch, the A011 peak-shift vending machine will be field tested until the end of August in Saitama Prefecture’s Kumagaya City and Gifu Prefecture’s Tajimi City, the hottest regions in Japan. Since the Great East Japan Earthquake in 2011, Coca-Cola Japan has been implementing specific round-robin cooling suspension measures in its vending machines in all areas except Okinawa Prefecture, cutting power usage by 15%. All newly purchased can and PET vending machines have been HFC-free since 2011, and LED lighting is being used in all vending machines since 2012.

READ  Fujitsu Receives Order for a Supercomputer System consisting of over 2,000 servers from Kyushu University
Categories
Other Stuff
Tagged
Japanledpower