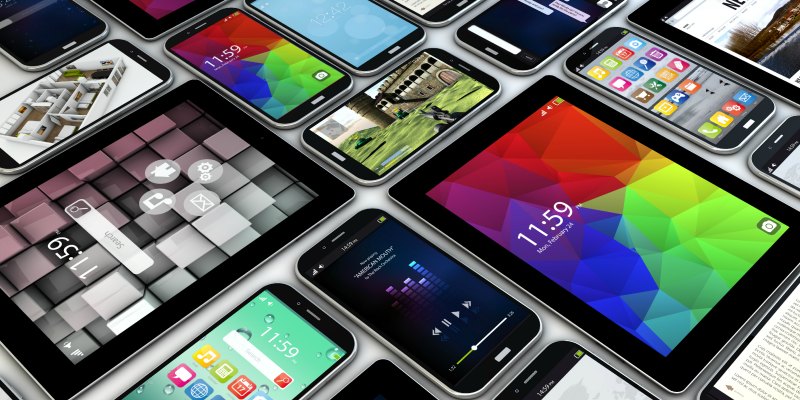 Technology never stands still, especially not when it comes to computers and phones. More memory, sleeker designs and better screens have been many tech developers’ prime concern. Screens in particular play a primary role in our society as multi-screening has become the norm for many people. And over the last decade screen technology has advanced a lot. We’ve taken a closer look at the screens from yesteryear and at the latest developments.

Demanding better screens – the multi-screening generation
We’re getting more and more demanding when it comes to our smartphone or tablet screens. For many people these devices are no longer merely useful tools; they’ve become a vital part of their everyday life. Even kids as young as 10 and 11 often use more than one device at the same time. While the television is on in the background, they’ll text their friends, play mobile games or log into Facebook.

What changed?
The majority of us multiscreen. We don’t simply use a phone to call someone anymore. It has become a major portal towards our social media channels. It’s how we keep in touch with friends and family and we’re happy to play with it while watching a film. But it doesn’t end there; each tech gadget seems to have its particular role in the household and is used for a specific task. For instance, PC and TV are primarily used to stream films while we use our tablets to order takeaway food. Some screens are even able to influence each other. Google’s Chromecast, for instance, allows you to share content from any device on your TV or even on your speakers and interactive games such as Cybeer Bar allow you to virtually pour your friends a drink. A seamless user experience across all of these platforms has therefore become very important.

The touchscreen
The development of the touchscreen has been a major catalyst for this development. What was once thought only possible in science-fiction now surrounds us every day. Scientists have toyed with touchscreen technology for a few decades, but it wasn’t until 2007 when Apple released its first iPhone that things really took off. At the time, the completely touch-based interface including the virtual keyboard was truly revolutionary. Nokia and Samsung also had touch-screen devices in the making, which is why Samsung and Apple still can’t agree who really had it first.

Touchscreen tech was a huge success and it didn’t take long for it to transcend platforms including tablets, laptops and TVs. In the late 2000s, big companies such as Apple, Microsoft, Amazon, Samsung, and Google have all been focusing on bringing out devices with touchscreen technology. It has come such a long way that we’re now even able to make flexible touchscreen surfaces. That means that virtually anything can be turned into a touchscreen including desks and walls.

With the arrival of the touchscreen, the future well and truly arrived in our time. The rise of the touchscreen paved the way for the multi-screen generation. We can now share content more efficiently and use each device for tasks that best fit its possibilities.