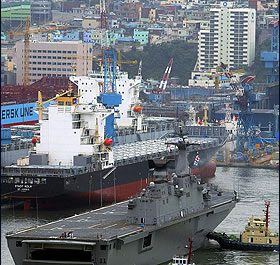 The Dokdo LPH, an amphibious landing and transport vessel that is at 14,000 tons the largest in Asia, became an official ship of the Korean Navy on Tuesday. The Dokdo LPH will be in charge of delivering soldiers and equipment ashore and will also serve as a strategic flagship leading warfare at sea. A multi-purpose vessel, it can also be used in disaster rescue and international peace-keeping operations. The Dokdo LPH is capable of moving soldiers to enemy shores with the help of helicopter and high-speed hovercraft and is staffed by some 300 crew. The 199-meter-long, 31-meter-wide Dokdo LPH is equipped with two Goalkeeper close-in weapon systems and also has a Rolling Airframe Missile (RAM) system that can hit targets within a 12 km radius.