A “doomsday” vault built to withstand an earthquake or nuclear strike is ready to open deep in the permafrost of an Arctic mountain, where it will protect millions of agriculture seeds from man-made and natural disasters. The doomsday vault has the capacity to hold up to 4.5 million batches of seeds from all known varieties of the planet’s main food crops, making it possible to re-establish plants if they disappear from their natural environment or are obliterated by major disasters. The seeds of wheat, maize, oats and other crops will be stored at a constant temperature of minus 18 degrees Celsius, and even if the freezer system fails the permafrost will ensure that temperatures never rise above 3.5 degrees Celsius below freezing. 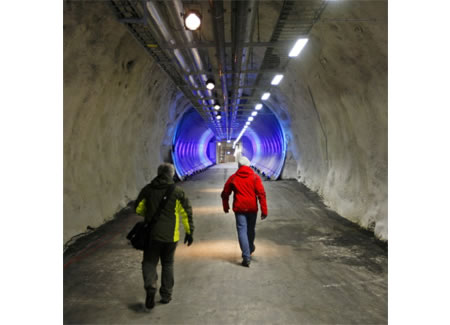 The vault, made up of three spacious cold chambers each measuring 27 x 10 meters, creates a long trident-shaped tunnel bored into the sandstone and limestone. Secured behind an airlock door, the three airtight chambers have the capacity to house duplicates of samples from the entire world’s more than 1,400 existing seed banks.

European Commission President Jose Manuel Barroso and Nobel Peace Prize winning environmentalist Wangari Matai will be among the personalities present at the inauguration of the vault, which has been carved into the permafrost of a remote Arctic mountain, just some 1,000 kilometers (620 miles) from the North Pole.