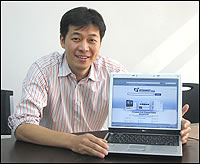 Despite the immense popularity of YouTube and other video-streaming destinations, searching for video on the Internet remains just as a confusing and frustrating experience it was three or four years ago. For example, type in any variation of Euro 2008 on YouTube’s search box and the top results are just as likely to include Fernando Torres highlights from the actual tournament as the animated images from EA Sports’ new video game. Each Web page has 10 video clips, so you have to go through more than 3,000 pages to check them all, said Jack Kim, the chief executive of Seoul-based Web technology firm, Enswers. Kim claims he has a solution to these problems in Enswers’ Web video search engine, EnswerMe (www.enswer.me), which he hopes to develop as the Google of video search. By combining the image recognition technologies with audio analysis, Kim says EnswerMe achieves an accuracy of above 99 percent in matching videos containing the same content.

EnswerMe has so far indexed more than 90 million videos and adds around 500,000 new videos per day. Kim said the company is planning to expand coverage from the current 100 sites to 250 sites during the first-half of the year, roughly half of the 500 sites worldwide streaming videos, and also improve search speed to add about one million new videos per day. EnswerMe is currently in a closed-beta phase, and the company plans to release the final version sometime during the second quarter. An English version of the search engine is also under construction.
Source:-