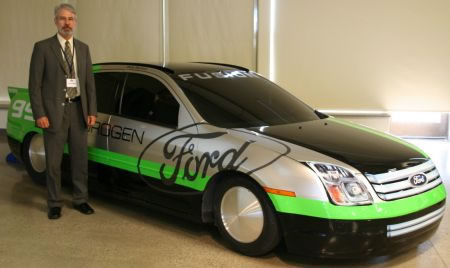 Ford’s fuel cell research team will put the Ford Fusion Hydrogen 999, the world’s first and only production car based fuel cell race car, to the ultimate test during Speed Week, Aug. 10-17, at the famous Bonneville Salt Flats in Utah. After more than one year of design and development and 10 years of hydrogen vehicle research, Ford hopes to set the first land speed record for a fuel cell vehicle based on a production car. The Ford Fusion Hydrogen 999 is Ford’s latest environmental innovation and is another step on the road toward commercially viable hydrogen fuel cell vehicles.

The Ford Hydrogen 999’s exterior looks like a standard Fusion with a few key differences. It’s more aerodynamic, lower to the ground, has no side mirrors and lacks a grille to let air in, because there is no radiator. At approximately 6,700 pounds with driver and a fully loaded cooling system, it’s about twice as heavy as a normal Fusion for the sake of stability.