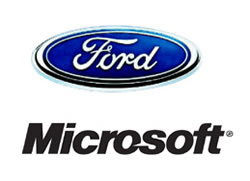 Ford Motor Company is teaming up with software giant Microsoft Corp. to offer cars with technology that controls mobile phones and portable music players by voice commands or steering-wheel buttons. The new technology called Sync uses Bluetooth technology for wireless connection of phones and a USB port to control and charge digital media players, including Apple’s iPod and Microsoft’s Zune. Ford owners will not need to worry about whether their car or truck is compatible with the latest phone or music player that hits the market.

Sync seamlessly integrates the vehicle with the popular portable electronic devices of today and is upgradeable to support the devices and services of tomorrow. Sync will debut this calendar year on the 2008 Ford Focus, Fusion, Five Hundred, Edge, Freestyle, Explorer and Sport Trac; Mercury Milan, Montego and Mountaineer; and Lincoln MKX and MKZ. The technology will be on all Ford, Lincoln and Mercury vehicles in the near future.