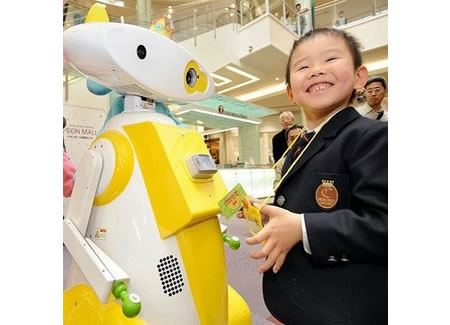 Friendly babysitter Japanese Robot identify children by their names and chat with them!

Major Japanese retailer Aeon Co. has introduced a 1.4-metre (four-foot-seven) yellow-and-white robot at a store in the southern city of Fukuoka in charge of entertaining the children. When parents leave their children with the kid-sized machine, they see that the youngsters wear a special badge that bears codes which the robot can read. The robot then identifies the children by their names and ages and chat with them, even though its vocabulary remains limited. The robot, developed with leading robot-maker Tmusk, can also use a projector in one of its eyes to beam advertising messages — or to show pictures that it has captured with a camera installed in the other eye.

The main objective of the friendly robots is to make sure that children are accustomed to robots, which are expected to be increasingly common in day-to-day life in Japan. With Japan’s population in decline, companies have put humanoids to use as security guards, receptionists and in other functions.