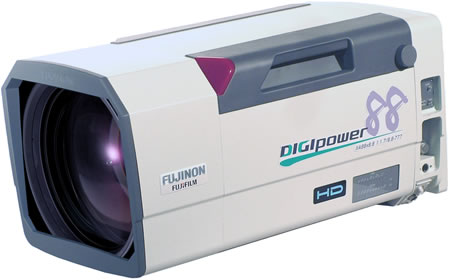 Fujinon Corporation, a subsidiary of Fuji Film Corporation announced its release of Digi Power 88 zoom lens with a focal length of 8.8mm, along with Digi Power 88 PF equipped with a better precision focus lens. Precision focus, an auto focus system was established for the first time in the world through collaboration between Fujinon and NHK. With extended definition and digitalization of broadcasting advanced worldwide as well as high definition broadcasting, there is booming a demand for cost-effective TV lenses of practical use with the fundamental performances.

Digi Power 88 which has been designed for cost-effectiveness, is a high definition TV zoom lens for field use with a focal length range from 8.8 mm at the wide end to 777 mm at the telephoto end, which is practically useful for sports live broadcast as well as for shooting in the field. It is expected to be used in the upcoming Beijing Olympics in 2008.Fujinon Digi Power 88 zoom lens measures 265×270×625mm and weighs 26kg.