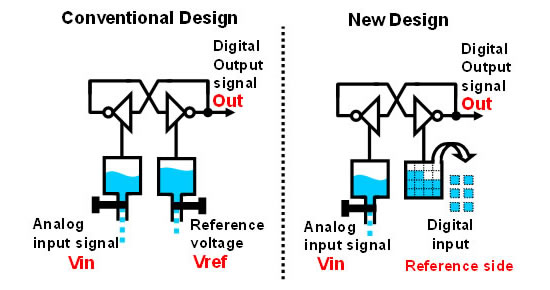 Fujitsu today announced that it has developed an analog-to-digital converter (ADC) that is 50% smaller and consumes 50% less power than conventional converters. A typical ADC works by comparing the voltage of an external analog input signal with an internally generated reference level to convert to a digital value. Switches are required to change the reference levels, however, advancements in semiconductor process scaling have made it difficult to guarantee high-speed switching. To overcome these issues, Fujitsu Laboratories has developed a completely new circuit design by using digital control techniques that require neither the use of a switch nor the generation of a reference voltage.

Using this design, Fujitsu Laboratories developed an ADC with 6-bit resolution and a conversion rate of 1 Giga Sample per second (GS/s) that has a die area of 0.04mm2—the world’s smallest for that performance class—and that consumes 9.9mW of electricity. Details of this technology were published at the 2012 International Symposium on VLSI Design, Automation & Test (2012 VSLI-DAT), which was held in Taiwan from Monday, April 23.