Fujitsu Semiconductor today announced the launch of the new FM4 Family of 32-bit general purpose RISC microcontrollers based on ARM Cortex -M4 processor core, as well as a new FM0+ family adopting the Cortex-M0+ core. Combined with current FM3 Family of microcontrollers, the group of products featuring the Cortex-M4, M3, and M0+ processor cores will amount to a line-up of more than 700 different products. The FM4 Family is based on the Cortex-M4 processor core, which features DSP and FPU functionality not included in the Cortex-M3 core, and has also received enhancements to the overall processing power of the CPU. 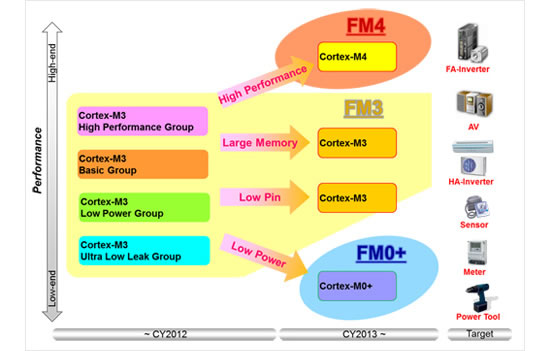 The FM0+ Family is a product group of energy efficient models employing a low-power Cortex-M0+ core and featuring the abundant peripheral functions of the FM3 Family, all delivered with flash technology. Compared to the previous Cortex-M0 core, the Cortex-M0+ core achieves 10% improved processing performance while consuming just two-thirds the power. Fujitsu plans to release sample quantities of products in these new families within 2013, and will also begin full-scale production of these products later in the year.