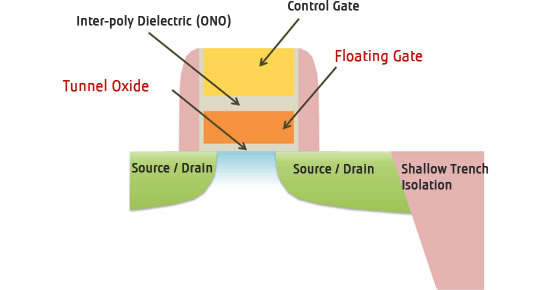 Fujitsu Semiconductor has developed the world’s first technology to produce chips with embedded flash memory on logic circuits fabricated using deeply depleted channel (DDCTM) technology, with the 55nm process at the company’s Mie Plant. This makes it possible to consolidate DDC—for low-power operation in a conventional CMOS design—with flash memory, which is non-volatile memory, on a single chip, opening up new possibilities for a wide range of applications, such as the Internet of things.

As the Internet of things—in which many kinds of devices are connected to each other via the Internet—becomes more common, there is likely to be a growing demand for devices such as LSIs with built-in sensors for use in wireless sensor networks. For applications such as these, in addition to the necessary characteristics of low-voltage operation and low power consumption, there is demand for device equipped with non-volatile memory, which does not require power for storing sensor data.