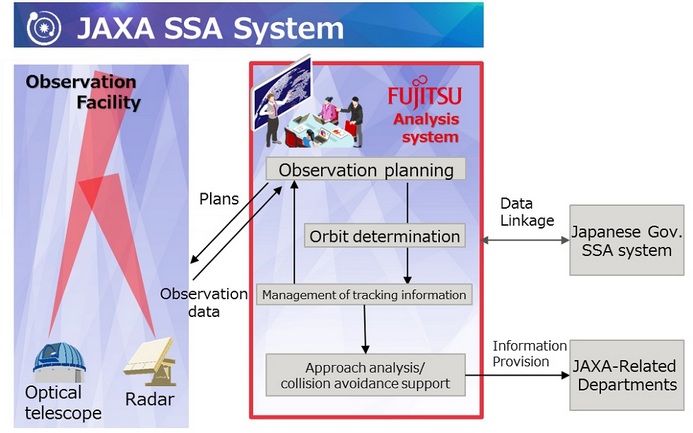 Fujitsu today announced the development and deployment of a new analysis system to calculate orbital courses of space debris for use with the Japan Aerospace Exploration Agency’s (JAXA) Space Situational Awareness System (“SSA system for monitoring space debris. JAXA started operations of the new system at the Tsukuba Space Center, Japan on April 1, 2022. Space debris like detritus from rocket launches, decommissioned satellites, and fragments of other artificial objects in orbit around the planet from explosions or collisions poses an increasingly severe problem for the future of sustainable development beyond our world.

Experts estimate that the number of pieces of debris currently floating in space is more than 100 million, and the number continues to increase. Space debris can move at speeds of more than 7 km/s around the Earth and is thus powerful enough to cause severe damage to the approximately 12,000 artificial satellites in space. JAXA will utilize the new technology to create plans on effective space debris observation, drawing on observation data from radar and optical telescope to calculate the trajectory of space debris and perform comparative analysis with the path of JAXA satellites.

JAXA’s SSA system consists of a radar, an optical telescope, and a Fujitsu-developed analysis system. The analysis system serves as the core of the SSA system, and allows JAXA’s system operators to create plans on effective space debris observation, the management of acquired observation data, and the analysis of orbit tracking calculations to support the detection of space debris approaching satellites and avoiding collisions.