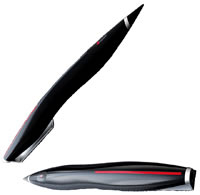 Futuristic pen QUAD stores everything you write in the air!

Nam Jeong-gyun picks up a glossy black pen and writes in the air as if writing on an invisible whiteboard. The pen has an electronic sensor at the tip, he says, so it can record every movement into a tiny memory chip located inside the streamlined body. The futuristic pen named QUAD is one of 32 design works displayed by the graduating students of the Product Design department of SADI. Samsung Group founded the school in 1995 as an academy of future fashion and graphic designers. The brainy pen created by Nam Jeong-gyun is just a concept; Nam hopes to one day sell the idea to luxury brands such as Montblanc, given that similar technologies are already in use in some consumer electronics such as the popular Wii video game console made by Japan’s Nintendo.

When an an important idea suddenly hits you, but there is nothing to write on, and you know that you’ll lose the idea if you don’t record it right away. This pen, allows you to write on any surface, storing everything you write,” Nam told spectators at the graduation exhibition of Samsung Art & Design Institute. The exhibition also featured a dual-screen laptop and a digital camera that doubles as a photo frame.