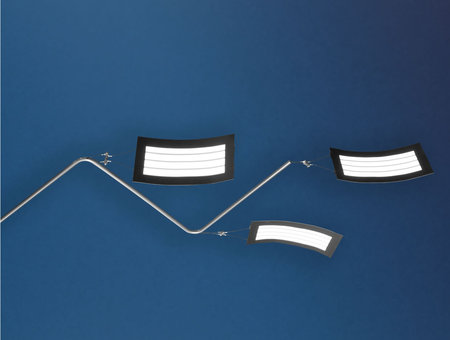 Imagine the impact on the lighting design industry—and life as a consumer of lighting—if there was a flexible, energy-efficient, paper-thin light source that could be produced economically. GE Lighting will preview potential organic light-emitting diode (OLED) lighting application ideas during two industry trade shows this year, Light + Building 2010 in Frankfurt, Germany and LightFair 2010 in Las Vegas, Nevada, USA. GE Lighting will show OLEDs in a number of configurations at both shows, including fixture prototypes that help to demonstrate the expected competitive advantages of GE’s approach to OLEDs: flexibility and an ultra-thin form factor.

Researchers and product development teams from GE Lighting with Konica Minolta, have been working together on OLED technology since 2007. GE’s technology partnership with KM, a world leader in imaging products, has enabled GE engineers to tap into KM’s thin-film technology, which plays an important role in the development of highly productive OLEDs.