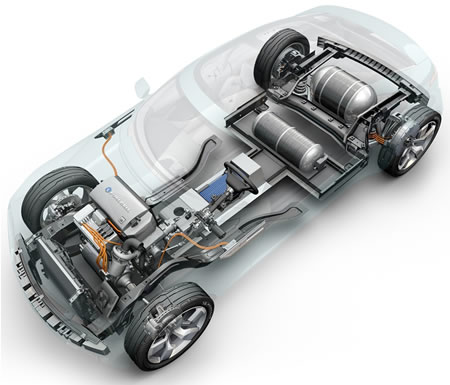 General Motors global commitment to developing transportation that reduces oil use and promotes energy diversity continued today at the Shanghai Auto Show with the unveiling of the next iteration of the E-Flex electric architecture, configured with GM’s newest, most efficient hydrogen fuel cell system to date. This second variant of the E-Flex system uses GM’s new fifth-generation fuel cell propulsion technology and a lithium-ion battery to provide up to 300 miles (483 km) of petroleum- and emissions-free electric driving. The fuel cell E-Flex is a true Zero Emission Vehicle (ZEV) and operates all-electric from both hydrogen fuel cell-generated electricity and grid electricity. It is plug-in capable, adding up to 20 additional miles (34 km) each time it is charged, further reducing trips to the refueling station. The E-Flex system is a flexible all-electric production vehicle architecture that can be configured to run on electricity from a number of sources. It was first shown in January at the North American International Auto Show in the Chevrolet Volt concept vehicle.

General Motors’s fifth-generation fuel cell system is half the size of its predecessor, yet it provides the same power and performance. The fourth generation currently powers the Chevrolet Sequel concept vehicle. The Sequel stores 8 kg of hydrogen and delivers a range of 300 miles (483 km). The fuel cell Volt will also deliver 300 miles of range, but with only 4.0 kg of hydrogen (75 miles / kg). The Volt also features molded GE plastic panels on the fenders, window glazings, instrument panel and steering wheel, which offer between 30 percent and 50 percent weight reduction per part.