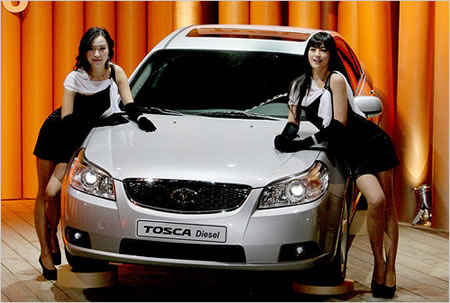 GM Daewoo Auto & Technology Co. unveiled the diesel version of their Tosca passenger car at the Papertainer Museum in Olympic Park, Seoul. The new diesel version model has a 2,000 cc variable turbocharger commonrail diesel injection engine, a 0-100 km/h acceleration rate of 11 seconds and can reach speeds of up to 206 km/h. The GM Daewoo diesel Tosca passenger car uses a combination of exhaust gas recirculation (EGR) technology and a diesel particulate filter (DPF) to meet the emission limits of Euro IV, a set of emission standards applying to vehicles sold in the EU since 2005.

The new Tosca arrives in Korean showrooms next month and will hit the European market early next year under the name Chevrolet. GM Daewoo hopes that the new model will be successful in Europe as diesel cars account for more than half of industry sales there.
Via – Chosun