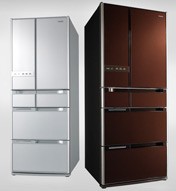 The Japan Fair Trade Commission issued an improvement order to Hitachi Appliances, Inc., after it advertised is large refrigerators as using recycled materials when in reality, almost no recycled parts were used. The order issued against the company applies to nine products released between September and November last year in Hitachi’s “Eiyo Ikiiki Shinku Chirudo V” and “Big & Slim 60” series. The products received an energy conservation award from the Ministry of Economy, Trade and Industry in fiscal 2008, but on Monday Hitachi applied to have the award withdrawn and the ministry accepted.

The commission said that the company issued advertisements on catalogues and its Web site from November last year, saying, “Hitachi has started using vacuum insulation panels utilizing recycled materials for the first time in the industry,” and “Carbon dioxide emissions in the production stage have been reduced by about 48 percent.” However, in six of the models no recycled materials were used at all, and in the remaining three, they were used in just half of the top panel. In addition, the reduction in CO2 emissions was actually a few percent. Hitachi admitted insufficiencies in the transmission of information and issued a comment offering a “deep apology.” It said it would respond to consumers’ inquiries but would not accept product returns.