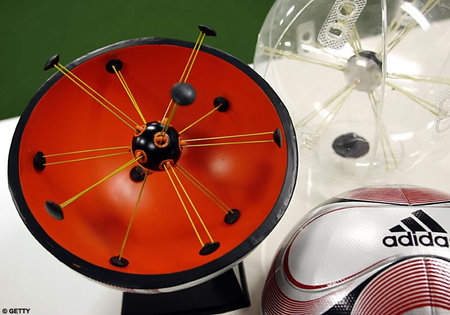 It’s the technology that could be the final word on arguments between football supporters and could end constant griping by managers over disputed goals. Hi-tech footballs fitted with special chips that tell officials whether a ball has crossed the line could soon be a regular feature at Premiership football matches after they were successfully trialed in a match in Japan. The ball is fitted with a sensor which allows it to be located anywhere on the pitch. Wires embedded in the pitch around the goalmouth emit a magnetic field which can detect the presence of a specially-designed ball fitted with a sensor. An encrypted signal is then sent to a watch worn by the referee to let them know whether the ball has crossed the line. The football can then be tracked its exact position around the pitch.

Tests during a recent tournament show the system is working and officials must now decide whether to approve the technology for wider use. The International Football Association Board, which laws down the rules of football , has said in the past that any such technology must be proved to be 100 per cent accurate before it can be used in professional tournaments, including the World Cup.