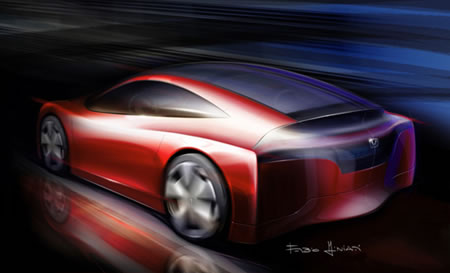 Honda will be presenting the world debut of an exciting new concept car at the forthcoming 2007 Geneva motor show, as well as showing the fully drivable FCX Concept fuel cell car in Europe for the first time.The fully functional Honda FCX Concept will be on display for the first time in Europe. The concept model features a newly developed compact, high-efficient Honda FC Stack as well as a long-floor, low-riding, short-nose body. It offers a comfortably large cabin and futuristic styling along with significant improvements in power output and environmental performance. The FCX Concept offers practical driving performance with a range of 570 km (Honda calculations when driven in LA4 mode) and a top speed limited to 160 km/h. Limited marketing of a totally new fuel cell vehicle based on the FCX Concept model is to begin in Japan and the US in 2008.

The Honda Small Hybrid Sports Concept, which has been designed by Honda R&D Europe based in Offenbach, Germany, explores the idea that a car can have a low environmental impact yet still deliver all the driving enjoyment expected of a compact sports car.