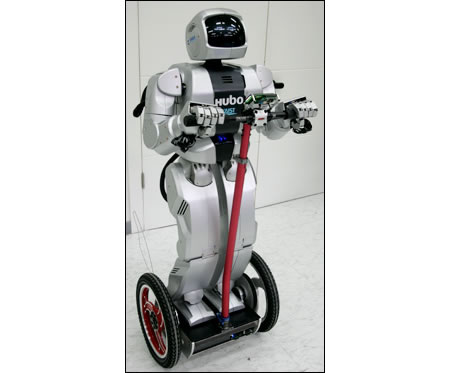 Korea’s first two-legged working robot, named Hubo, has learned to move around by means other than its feet aboard a two-wheeled scooter. Prof. Oh Jun-ho from the Korea Advanced Institute of Science and Technology said that his team had recently designed a method for Hubo to ride a two-wheeled scooter created by the U.S.-based Segway. The Segway helps Hubo travel fast roughly 20 kilometers per hour compared to its present walking speed of 1.3 kilometers per hour. At present Hubo moves on board the Segway remotely controlled by a human and in future Prof. Oh Jun-ho plans to program Hubo to steer the Segway itself. Days are not far when Hubo will step onto the Segway and drive the transportation device just as we humans drive. Oh added the Segway will allow Hubo to maneuver easily in a variety of environments such as narrow areas, where it has struggled to pass through up until now. 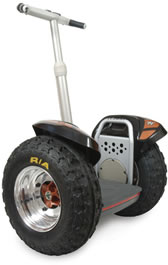 The Segway is a one-axle, stand-up transporter with a rechargeable battery and a unique control system that redirects the bike in the direction the rider leans. Invented by Dean Kamen and unveiled in Dec. 2001, the high-tech self-balancing device is used by various emergency management and police agencies across the globe. Hubo, the name coined by combining humanoid and robot, is popular in Korea. Sporting the face of Albert Einstein, the bi-pedal robot gained international stardom in late 2005 during the Asia-Pacific Economic Cooperation forum by greeting world leaders.