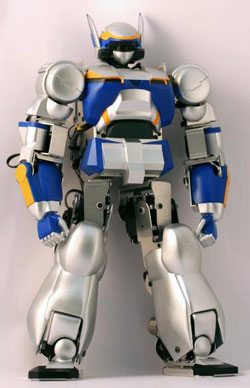 Using research results from the Humanoid Research Group of the Intelligent Systems Research Institute of AIST, two start-up companies approved by AIST have developed a humanoid robot called “HRP-2m Choromet,” or “Choromet,” for short.Chromet is 35 cm high, weighs 1.5 kg, and has 20 degrees of freedom. It has triaxial force/torque sensors on its legs and accelerometer and gyroscope on its trunk, and a small, energy-saving controller developed at AIST that is driven in real-time by Linux (ARTLinux). Also developed at the same time at AIST was base software that runs on the Linux system. Moving Eye (ME) had already been working on the miniature controller and ARTLinux, while General Robotix (GRX) had already been working on the base software for the robot. Chromet is the result of combining these technologies

Given these traits, the software used to move and control Chromet may have applications in education and research. The robot in this project was developed by high-tech start-up and other companies with technology that had been transferred from AIST, an excellent example of AIST’s function as a hub for innovation.
Via AIST (Japanese)