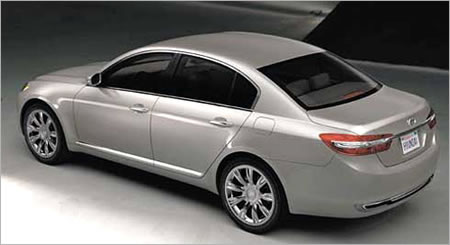 Hyundai Motor announced that it will debut its high-end Genesis sedan in Korea in December. The Genesis is Hyundai’s luxury model designed to go up against the Lexus GS, Benz S-Class or BMW 5 Series. The rear-wheel sedan, which had been code-named BH, was originally scheduled to be introduced next March. With Genesis, Hyundai plans to introduce a premium brand that will rival Toyota’s Lexus, Nissan’s Infiniti and Honda’s Acura. Hyundai will launch the Genesis in the U.S. next March. The Hyundai luxury sedan Genesis also features adaptive cruise control which uses radar to set the car’s speed according to how fast the car ahead is traveling. Other high-tech gadgets include adaptive head lamps that change direction as the car moves. Genesis is a little bigger than the BMW 5 Series or Benz E-Class, at 497.5cm long, 186.5cm wide and 148.0cm high.