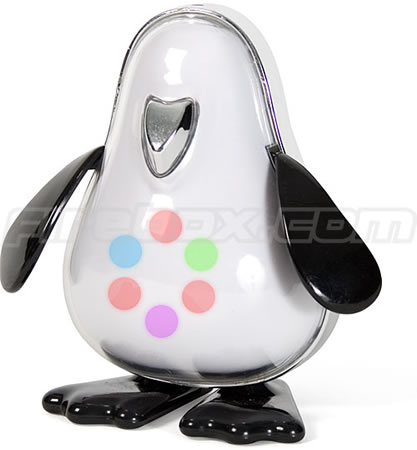 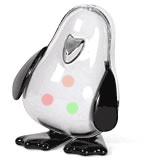 Just like the other creatures in the burgeoning i-menagerie, i-Cy Penguin moves and grooves according to the music he’s ‘fed’ and even responds to touch. As well as amplifying your tunes via its built-in speaker, this interactive music-loving penguin flaps, waddles, squawks, flashes and even changes mood according to the music it hears. Multicolored flashing LEDs animate i-Cy’s tummy in time to the beat and also reflect his mood as he gets in a flap over various tunes. And if he doesn’t get his regular music fix he’ll start waving his wings and squawking.

i-Cy Penguin’s mood varies depending on the music you play – just place him near an audio source and watch him waddle and flap around. i-Cy even functions as a speaker for your audio player. Simply plug him into the headphone jack of your audio device (CD, stereo, MP3, computer, etc) and let the disco commence. i-cy Penguin is available for approximately £19.95 ($40).