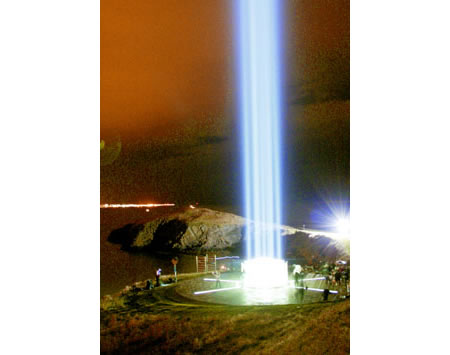 A peace monument designed by artist Yoko Ono, the widow of John Lennon, was installed in the capital of Iceland on Tuesday, to mark what would have been the late Beatle’s 67th birthday. The imagine Peace Tower, dedicated to John Lennon and conceived by his widow, Yoko Ono, was lit in Reykjavik on Tuesday night to mark the late Beatle’s 67th birthday. The Imagine Peace Tower is engraved with the message “Imagine Peace” in 24 languages and is filled with about 500,000 capsules containing messages of hope sent by people around the world. The monument’s cylindrical illuminated base silhouettes the tower and sends a “peace light” skyward from the world’s northernmost capital.

Former Beatle Ringo Starr and George Harrison’s widow Olivia also attended the ceremony to commemorate the completion of the monument. The monument will light up annually on New Year’s Eve and also from Oct. 9 through Dec. 8, the anniversary of the death of Lennon, who was shot dead in New York City on Dec. 8, 1980, as he and Ono returned home from a recording session.