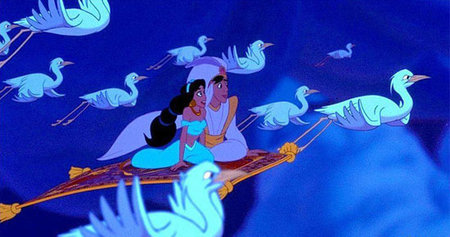 Instructions to make a flying carpet!

Perfectly timed for pantomime season, a team of scientists has come up with instructions for how to make a flying carpet. The magical device may owe more to Walt Disney than to The Arabian Nights, but it is not pure fantasy, according to Lakshminarayanan Mahadevan of Harvard University in Cambridge, Massachusetts, and his co-workers. The researchers have studied the aerodynamics of a flexible, rippling sheet moving through a fluid, and find that it should be possible to make one that will stay aloft in air. The researchers say that to stay afloat in air, a sheet measuring about 10 centimeters long and 0.1 millimeters thick would need to vibrate at about 10 hertz with an amplitude of about 0.25 millimeters. No such carpet is going to ferry people around, though. Making a heavier carpet “fly” is not forbidden by the laws of physics.

But the researchers say that their “computations and scaling laws suggest it will remain in the magical, mystical and virtual realm”, as the engine driving the necessary vibrations would need to be so powerful. The key to a magic carpet is to create uplift by making ripples that push against fluids such as air or water. To travel at speed, the carpet would have to undulate in big ripples, comparable to the size of the carpet. This would make the ride very bumpy.