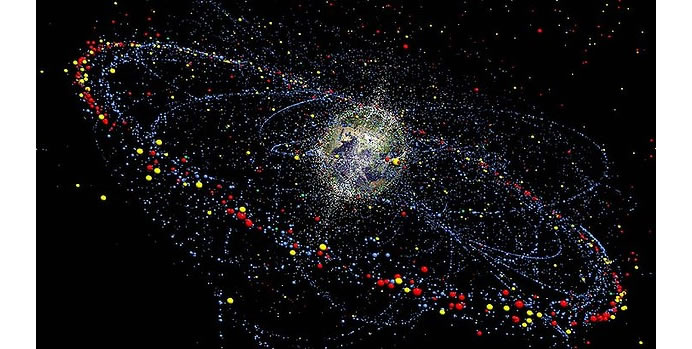 As low earth orbit is starting to get cluttered with space debris, countries with very active space programs like Japan is trying ways to clean this mess. To solve this problem, the Japan Aerospace Exploration Agency (JAXA) is teaming up with fishing equipment manufacturer Nitto Seimo, to build a magnetic net that will be able to fish out floating space debris. The first test of this “clean up” equipment is scheduled for late February. A Japanese rocket will be launched to deploy a specially developed satellite made by researchers at Kagawa University. Once the special satellite is in orbit, it will unreel a wire net around 300 meters long that will then generate a magnetic field strong enough to (theoretically) attract some of the debris in orbit, most of which is metal.

The net is 30cm wide when unspooled and is made of three strong and very flexible lengths of metal fiber. Taking advantage of Nitto Seimo’s experience in the fishing industry, a specialized magnetic net measuring 1 kilometer in length has already been fabricated. As of the moment, space experts say that there is an estimated 100 million bits of man-made junk in low earth orbit. Of that total, some 22,000 pieces are believed to be 10 cm or larger, making them dangerous for space operations.