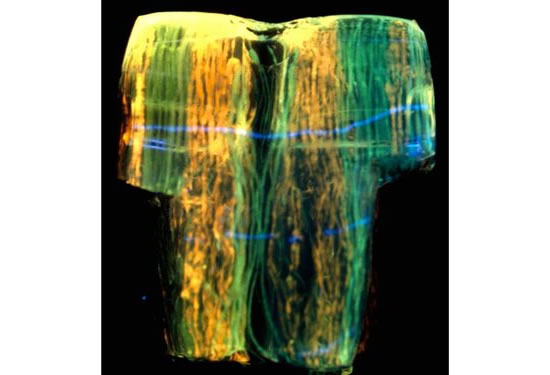 Japanese researchers have developed a technique to reshape living cells into thread form, which could prove to be a boon to transplants one day. Researchers used collagen to serve as a glue to connect the cells. Cells mixed with collagen were poured into a glass tube and shaped into thread form with a thickness as fine as human hair. The cells were covered by a thin membrane made from plant fiber, but the cells could move and multiply within that membrane. The thread-shaped cells were used to create rat heart tissue cells which were capable of contracting.

By giving three-dimensional form to the thread-shaped cells by bundling or wrapping them into a spherical shape, researchers hope to use the technology in the future to create muscle tissue and blood vessels for use in regenerative medicine. The research group was led by Shoji Takeuchi, an associate professor specializing in micro mechanisms at the Institute of Industrial Science, which is part of the University of Tokyo. In another experiment, thread-shaped cells created from rat pancreatic islet cells were transplanted into the kidney of a mouse with diabetes. That led to a decrease in blood sugar levels, which eventually dropped to normal levels. Other attempts were made to create thread-shaped cells from blood vessel and nerve cells.
Source: