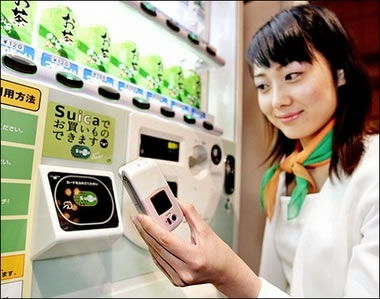 US soft-drink giant Coca-Cola will equip all its 200,000 vending machines by the end of 2008 in Japan to accept payment through mobile telephones, an increasingly popular money option in the country. Coca-Cola Japan said that by the end of 2008 all its vending machines will accept Felicia, contact less credit cards on mobile phones developed by cellular industry leader NTT DoCoMo and electronics giant Sony. The system will make it possible to buy any soft drink, coffee, tea or fruit drink in Coca-Cola machines in Japan by holding up a mobile to the machine, with the cost of the refreshment going on a monthly phone bill.

At the end of last year there were 2.77 million machines in Japan, nearly half of them run by Coca-Cola Japan. Coca-Cola also benefits from electronic payment, which is less expensive in maintenance costs than bills or coins. Felicia cards are increasingly accepted as payment in stores and public transportation in Japan.
Via AFP(Tokyo)