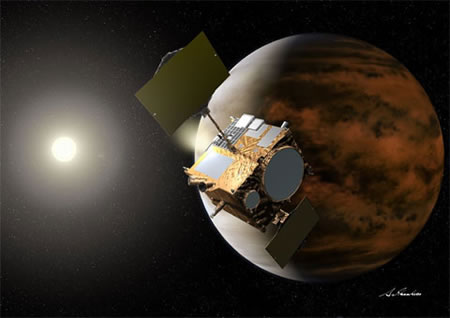 Japanese space probe Akatsuki is expected to be put into orbit around Venus on Tuesday, 200 days after a rocket carrying the probe blasted off in May, Japanese space agency officials said Monday. The Venus Climate Orbiter “AKATSUKI” shifted its attitude at 7:50 a.m. (local time) on December 6 to be ready for Venus orbit insertion at 8:49 a.m. on December 7. According to the Japan Aerospace Exploration Agency, Akatsuki has succeeded in its attitude control to tilt its engine toward its traveling direction shortly before 8 a.m. Monday. When Akatsuki approaches up to about 550 kilometers above Venus around 9 a.m. Tuesday, it will reverse the engine for 12 minutes to slow down before being affected by Venus’ gravity to enter into orbit.

Once the Japanese space probe Akatsuki is successfully in orbit, it will adjust twice to move into the targeted oval orbit circling at altitudes of 550 to 80,000 km around Dec 13. It will then observe the atmosphere of the planet for over two years using instruments including ones to measure near-infrared rays and ultraviolet rays. Akatsuki was developed at a cost of 25.2 billion yen for Japan’s first planetary exploration mission since an unsuccessful stint by the Mars probe Nozomi, which was launched in 1998 but failed to move into the planet’s orbit due to a series of technical glitches.