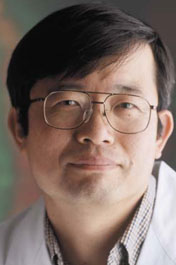 A Japanese team has developed a reagent that can make cancer cells glow and become visible to the naked eye, an advance that could help surgeons more accurately distinguish between cancerous and healthy tissue, the medical journal Science Translational Medicine reported Wednesday. Within minutes, the sprayed reagent, developed by Yasuteru Urano, a chemical biology professor at the University of Tokyo, and Hisataka Kobayashi, chief scientist at the U.S. National Institutes of Health, can highlight carcinoma smaller than 1 mm, which magnetic resonance imaging and other tools cannot detect. Scientists are hoping that this will become a regular part of the health industry and health information tech. The team’s attention was drawn to an enzyme on the cell surface that works like scissors to cut off glutamic acid from glutathione, and the researchers created a molecule that glows green only when the glutamic acid is cut off.

The Japanese team succeeded in making cancer cells glow more than 20 times brighter than regular cells by spraying the reagent on the abdomen of mice. Their abdomens had been implanted with human ovarian cancer cells, the team said. The team is still testing to see whether the fluorescent molecule could be poisonous to cells, but they said no hazardous effects have been detected so far even by using large amounts of the reagent. They aim to put the reagent to practical use within a few years as an easy and low-cost tool at hospitals to find cancers and remove them without overlooking small carcinoma. Cancer is the largest cause of death among Japanese, followed by heart failure and cerebral vessel disease.